There are few writers I have read who I have found can confound and annoy me so much as John Hart- though not necessarily in equal measures. His plotting is clever, his characters both memorable and devious. His storyline fast and flowing, fuelled with unputdownability. His prose excellent, description at times sublime but in Iron House his

description can be a little excessive, especially when it comes to torture where I feel it is sufficient to know it is taking place without having the minutiae described.

Having said all that if it is thrillers you like then you must give it a try. It is the story of two brothers Michael and Julian who, having been placed in a home-the Iron House of the title- face bullying and abuse. Michael, the strongest, feels it necessary to defend his brother against the other boys until one day Julian pushed to his limit reacts. Michael feels obliged to take the blame for his sibling’s actions and soon Julian is adopted.

Leaving the home Michael resorts to living on the streets of Spanish Harlem, fighting for everything much as before. On one particular day a fight he is in is witnessed by one Otto Kaitlin, a crime lord, who recognizes in Michael a kindred spirit and takes him home intent on making him his protégé.

Our hero finally falls in love and shows to his beloved the same kind of love he once did for his brother.

The fact that this is a rags to riches tale, or destitute makes good, like so many before it does not distract from its readability. It is easy to see why John Hart is a multiple Edgar award winner.

“If you crave thrillers that are vividly beautiful, graphic, will make you bleed, try John Hart.” ˜ Patricia Cornwell

“Lean, hard and absolutely riveting, Iron House is a tour de force. With his best book yet, John Hart has clearly joined the top rank of thriller writers.” ˜ Vince Flynn

The novel revolves around a family and the locality in which they live, where criminals are getting away with the crimes they have committed because of the soft approach of the judicial process. It’s for this reason that one of the locals take it upon himself to exact vengeance in the form of a masked vigilante who leaves his calling card at the scene of his ‘just’ punishments. On the card is the legend ‘The Black Knight’.

What makes this novel unusual is that it is almost parochial in its narrative, using a local Press announcement of the death of an elderly woman after being frightened by a burglar. The criminal is acquitted of the crime. It is this that turns a normal, everyday man into an avenger: The Black Knight. But during the story, as one Press announcement follows another, the moral question is posed about the rights or wrongs of taking the law into your own hands, and how addictive it can be.

How many of us have been sickened by a crime only to be disgusted at the leniency of the law? Oh how we would want to dish out our own form of punishment. But where do you stop? And how long before you go over the line and commit murder in the name of justice?

This is a thought provoking story. I found myself being drawn into it gradually, just like the avenger is drawn into the compulsion to continue exacting revenge. Nik Morton’s story will demand that you stay with it and discover how far The Black Knight will go. Will he go beyond the line and will he ever stop?

I first came across Jon Courtenay Grimwood’s work with his Arabesk trilogy; set in the almost-fictitious El Iskandryia. I say “almost” because, surely, this is Alexandria seen through the lens Grimwood’s imagination. Since then, I have 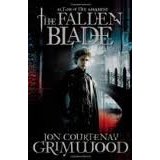 pounced on each of his books as they came off the press although for me, none have lived up to those first three novels until  I read this one:  “The Fallen Blade” set in a Venice which never existed in our universe.

In “The Fallen Blade” we see a world in which Tamburlaine conquered China. And now, astonishingly, a Mamluk, a Turk, has become one of the Council of Ten in control of the city of Venice. This is a Venice ruled by the descendants of Marco Polo and a Venice – like our Renaissance city of the same name – where trade is all important to keep the city’s lifeblood flowing.

The City is stalked by the shape-changing krieghund and rule is enforced by the Assassini led by Atilo surprised by beautiful Tycho,  a sort-of-vampire boy struggling to remember his past – agile enough to outrun any pursuit and fast enough to evade a plunging dagger. For Atilo, the perfect candidate to become his apprentice Assassin.

But what a backdrop against which to paint this tale. A Venice as dark as anything Grimwood has ever written and as sweetly tempting as a succubus; it draws the reader onward until the weird seems normal and the normal merely banal. We willingly suspend disbelief. Were the Renaissance centuries as careless of human life as this? Were lives as casually tossed aside as this? Were children used so? Did those born to high position consider they were so far above the ordinary man?

“The Fallen Blade” would certainly have us believe so and I fancy too, that he is correct. One only has to compare his writing with the cruelty still rife in the 21st Century  to feel that it could only have been worse. I felt the sun had never risen above the horizon from start to finish – in his universe or in mine.

You will want to know what happened to Tycho. You think I will tell you? Oh no, you must read the book and ultimately, the second and third in the trilogy.